This past spring, in anticipation of the big Apollo 11 50th anniversary, I began looking for opportunities to attend one of Gene Kranz’s presentations. Gene is my hero… he’s smart as heck, passionate and kind — an all around incredible person.

He studied aeronautical engineering at St. Louis University — which is a mile or so from where I now live — and even worked at McDonnell Aircraft Corporation, which is now, of course, Boeing (the same campus at which I work I today). He also served in the U.S. Air Force between his time in school and at McDonnell.

Gene ultimately went on to work in Mission Control for NASA. He worked on both Project Mercury and Project Gemini before serving as Flight Director for the Apollo 11 and Apollo 13 missions. For those who’ve seen the 1995 Tom Hanks flick, “Apollo 13,” Kranz’s character is played by Ed Harris… you know, the guy with the buzz cut who always wore the vest.

To this day, I’ve watched just about every documentary and read practically every story about Gene… essentially every anecdote that touches on his incredible life and legacy — I’ve read or heard. In May, when I caught wind of his upcoming presentation at Purdue, I knew I had to at least try to attend. Tickets became available online in early June on a first come, first served basis — and while admission was free, it was still a competitive process. I consider myself very, very lucky to have secured a seat.

Wednesday night, I excitedly loaded up my new Boeing tote bag (thanks Jiho!), crawled into bed and couldn’t seem to fall asleep — I was so anxious to see what Thursday would bring. I woke up with a spring in my step, ready to make the 4-hour drive to West Lafayette.

I thought I had built sufficient pad time into my schedule… and it would have been sufficient had there not been a time change. News flash: Purdue is located within the EASTERN time zone. Even though it was tight, I did make it in time.

After checking into my hotel, I drove to the college campus — a mere mile from where I was staying. I slowly wound my way up to level four of the Grant Street parking garage, got out of my car and hurriedly shuffled over to the elevator. I had a five-minute walk ahead of me and approximately five minutes before the doors opened.

Lucky for me, just after exiting the elevator I happened to run into a very nice guy named Adam. Lo and behold, Adam is the director of the Purdue University Airport. He helped me to quickly navigate to the Loeb Playhouse, as that’s where he was headed too.

I found a seat, and anxiously waited for Gene to take the stage. Before I knew it, 3 o’clock (EASTERN TIME!) had rolled around. The lights dimmed, and a young PhD student took the stage to introduce the man all 1,000 of us were waiting to see. The audience erupted in applause when Gene — white vest and all — took the stage.

I shed a couple tears (OK, more than a couple) during the first 5-10 minutes of Gene’s talk. I simply couldn’t believe I was finally seeing my hero, Gene Kranz — I was just feet from him, listening to him tell these remarkable stories of the early years of American space exploration. He covered all the highs, and all the lows before engaging in Q & A with the audience. 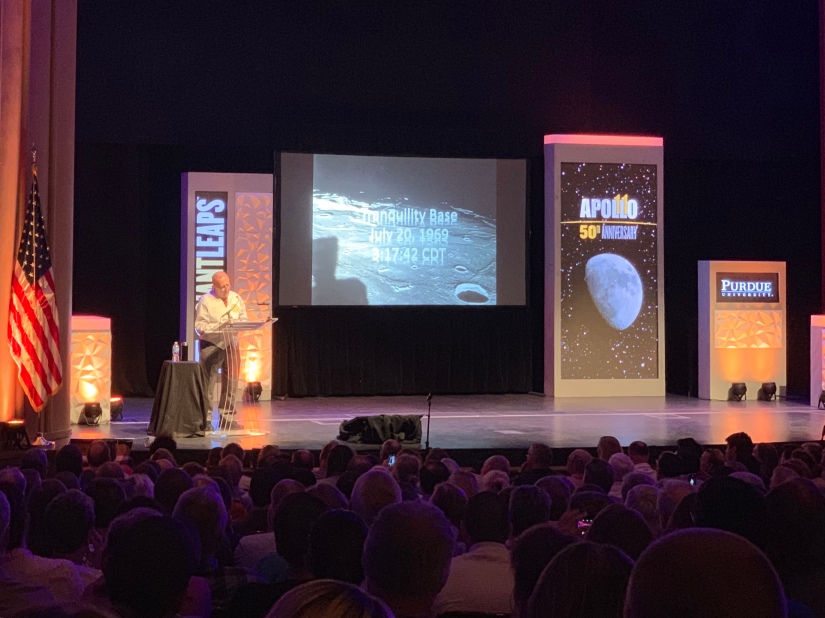 Afterwards, I was determined to try to meet him. I waited patiently against a wall in the auditorium, as the crowd of 1,000 turned to 500… then 100… then 50… then five — I was one of a mere five people left in the suddenly lifeless Loeb Playhouse. I held my copy of “Failure is Not an Option” tightly against my chest. Every so often I would ask a passerby if they knew whether or not Gene would be coming out to sign books. They each said, “No, he won’t.”

After about 30 minutes I was nearly ready to give up. I casually peered around a corner into a hallway outside the theater where I saw a queue of 15-20 people, all holding a copy of Gene’s book.

“Excuse me,” I quietly said to the last person in line — it was a gentleman who appeared to be in his 60s or 70s with a Nikon camera hanging from his neck.

“Do you know if Gene will be coming out to sign books?” I asked.

He came closer to me and motioned for us to turn our backs toward the others in line and said quietly, “This is the line for a special ‘meet and greet’ event, and as I understand it, you need to have a special ticket, or have your name on a list of some sort.”

My eager smile quickly turned into a hopeless frown. “Oh…” I replied.

“I don’t have a ticket but I figure, I may as well try, right?” the gentleman replied.

“I’m Ted,” he said as he reached out to shake my hand.

Ted and I began talking about our lives and what had brought us to Purdue to see Gene. A father and son were standing in front of us — obviously ticket holders — and the dad turned toward us and said, “What’s two more people, right?”

Ted and I nodded and smiled. Through our conversation, I learned that he served in the U.S. Army in the 1960s, and went to school right there at Purdue. He was now retired from Verizon.

Ted was impressed by the fact that I drove the whole way from St. Louis that very morning. He also enjoyed learning that even though my career took some strange turns out of college, I finally found my passion, and with a lot of patience and hard work, landed my dream job as a historian and communicator for Boeing. Along with its heritage companies, Boeing built nearly every component of the Apollo spacecraft and the massive Saturn V rocket — I think that’s pretty remarkable.

After about 15 minutes, a woman waved at all of us to follow her through a doorway. We went down two flights of stairs and through a hallway before stopping — just out of sight around the corner, sat my hero, Gene Kranz.

Two people who obviously had some sort of authority approached me and Ted and asked, “And what are your names?” Ted introduced himself, and we were quickly told that our names weren’t on the list… well, we already knew that. A gentleman offered to escort us back upstairs, and Ted said to him, “What about Annie? Could you please let her meet him? She just drove all the way here from St. Louis.”

Ted and I quietly made our way back upstairs — closely followed by the man who had instructed us to do so. We exited the building, before being rudely awakened by the steamy, 95-degree, early evening air. We walked together, weaving in and around campus buildings.

“You know, not a lot of people got to attend this. They had to open up the other viewing areas because of the demand — each of the auditoriums holds thousands,” Ted told me (obviously trying to lift my spirits).

It worked — sort of.

“We’re lucky to have seen him in person,” he added.

Before I knew it, it was time to part ways. Ted was headed into the campus store, but he kindly saw me all the way to the garage where I had parked.

We shook hands, and he wished me safe travels.

I made my way back to my car, picked up dinner and headed back to the hotel. When I got back to my room, I unpacked my purse, which of course included my unsigned copy of Gene’s book.

I immediately lost it.

I sat on the bed and just cried. I couldn’t keep it together and I didn’t know why. I’m 32 years old for goodness sake — I shouldn’t be this sad, should I? I felt like a sad, helpless little kid… just so upset over not getting what I wanted.

I finally pulled it together, ate my dinner and called it a night.

Early the next morning, I gathered my stuff and hit the road. Just as it was on the way to Purdue, the drive back home was beautiful — blue skies, sunshine and seemingly endless fields on either side of the road. It’s not often that I drive for hours on end all by myself, but I found it to be quite relaxing and a good way to gather my thoughts.

I didn’t meet Gene, but I did see him… I did hear him. I got to hear his firsthand account of what happened before, during and after the historic Apollo 11 mission. Through his words, I could feel every emotion he felt 50 years ago — the tension, the joy, the worry and the pride. It was an incredible afternoon and I feel so very lucky to have been there.

So, on this, the 50th anniversary of the historic lunar landing, I’d like to thank everyone whose hard work and selflessness made the Apollo program possible. To Gene, the others in Mission Control, the brave astronauts and the countless NASA employees; to the engineers and other contributors at companies like Boeing, North American and McDonnell Douglas — among others; and of course to the families of all the folks whose dedication kept them away from home for long periods of time… thank you. 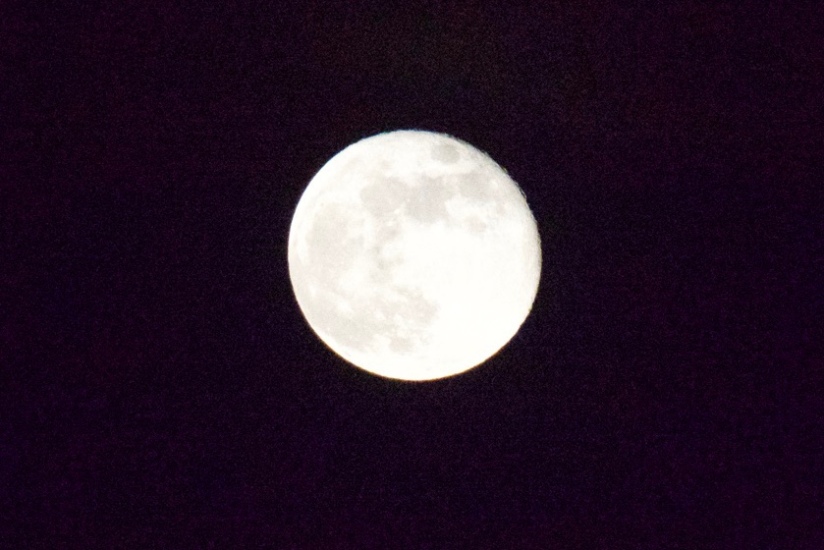 I can’t wait to see what the next era of space exploration will hold.

P.S. Earlier in the week, my husband Scott and I were driving through downtown on our way to dinner, and he said we needed to make a quick stop. He pulled over, turned on the hazard lights and left. I saw him rent one of the nearby motorized scooters and he was out of sight before I knew it.

About 20 minutes later he finally returned, and handed me this guy. 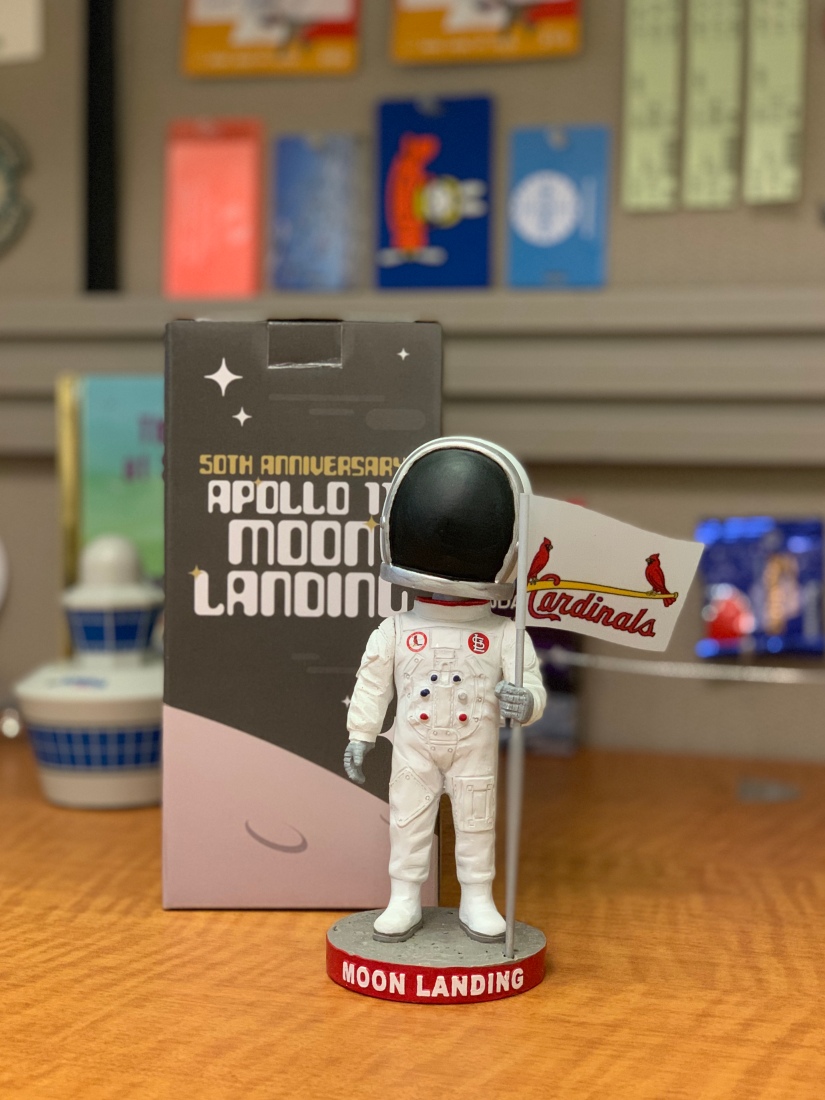 I had no idea they were even doing this giveaway to celebrate the Moon landing, but he caught wind of it, bought a special “theme night” ticket and went in just to pick it up to surprise me. Thank you, Scott, for loving me and supporting me in all my pursuits, as nerdy as they might be.

My first ACJ! Germany-based K5 operates four A319s, an A318 and an A350. I’ve seen this guy parked out at STL, but never caught him in the air. He made the roughly 3.5-hour flight from one of my all-time favorite airports: VNY!
EX-treme Makeover. Which look do you like better on our newest fighter...? Clean and green or dressed to the nines?
The @boeing 757 is certainly prone to dimpling of the skin... and I kind of love it. I also love @delta sports charters at CPS!
Another shot of the freshly-painted Eagle II 02 😏.
A-three-nine-teeny.
Hey, EX02 got her 🎨!