I’ll admit, I’ve NEVER flown on Sun Country Airlines. I mainly attribute it to the fact that I prefer visiting urban meccas like New York City or London over tropical escapes like Mazatlan or Puerto Vallarta — the warm, sunny destinations they’re most known for flying into and out of. But that’s about to change. I booked my first Sun Country flight for this October  — MSP to DFW for a good friend’s wedding. And with Sun Country recently announcing their Hometown Lakes Project, I have a feeling I may start making a bit more of an effort to fly with them.

Does the name Mark Herman ring a bell to you? If not, I’m willing to bet you’d recognize the Minneapolis-based artist’s work the second you saw it. Minnesotans like myself are likely most familiar with his modern, yet vintage graphic art depicting landmarks and other notable places around the state. And Sun Country recently announced they’d be naming each plane in their fleet after one of our state’s 10,000-plus lakes, and displaying Herman’s depiction of that lake on the aircraft’s interior. How cool is that? 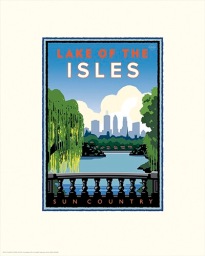 I think with Sun Country’s focus on “summer vacation” type destinations, it’s easy to forget that the airline is actually based here in the Twin Cities. But Sun Country hasn’t forgotten where they came from, and they don’t want you to forget that either. By staying true to their Minnesota roots (as we Minnesotans pride ourselves on doing), Sun Country really won me over.

The Hometown Lakes Project will kick off this spring. And in addition to Herman’s artwork inside the plane, the name of the featured lake will be painted on the exterior of the aircraft under either side of the cockpit, and outside the front boarding door. 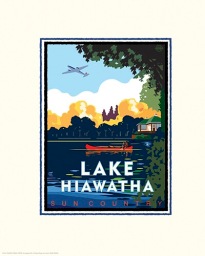 Cheers to you Sun Country… for staying true to your Minnesota Roots and for showcasing your love of our beautiful state. I can’t wait to see which lake will be featured on my plane this fall!

All images courtesy of Sun Country Airlines. Learn more on their website, where you can also view all of Herman’s work to be featured in the project.