For whatever reason, I’ve had two songs stuck in my head over the past month or so: “Take a picture” by Filter and “Samson” by Regina Spektor. Both are songs I feel strong emotional ties to—each bringing me back to a different stage of my life.

Yesterday, I flew to Syracuse, NY, marking my seventh day trip this year in addition to being the smallest city and cheapest airfare of the septet. I nabbed a $40 basic economy fare on United Airlines for my outbound flight (an Embraer E-175 operated by SkyWest), and a $28 fare on Frontier coming home (my first time flying the Denver-based airline with an all-Airbus fleet).

A week or so ago, I reached out to the media relations team at Syracuse Hancock International Airport about a potential airfield tour. I just love being in the action, riding alongside the airplanes and learning the stories of different airports, big and small—Minneapolis to Van Nuys, Ames to Schipol, O’Hare to San Diego and now: Syracuse.

I was delighted to hear that someone on the airport operations team was more than willing to show me the ropes. Upon arrival, I was instructed to make my way down to the lower level of the airport to meet with a guy named Darren. While I was waiting, I stood with my nose and the palms of my hands pressed against the large windows (as I typically do) and just gazed lovingly at the few planes sitting idle in front of me. And then, as if on cue, I faintly started to hear music: “Awake on my airplane, awake on my airplane…” For those who know the song from the late nineties, those are the opening words to Filter’s “Take a picture”—the song I referenced above. It was eerie, exciting and perfectly fitting.

A few minutes later I saw a truck pull up outside, and a gentleman hopped out and came inside—it was Darren. I followed him out the door, hopped in the passenger seat of his truck and away we went. We drove the whole perimeter of the airfield—I saw and learned so much. I found out that Darren himself has worked at the airport for nearly 40 years, and has lived in the area his whole life. He also holds his commercial multi-engine pilot’s license, which (of course) I found to be super cool. I always love meeting others with a passion for aviation, because no matter the tie to the industry… it’s a common bond.

SYR has two active runways: 15-33 and the longer 10-28. On any given day their outbound flights (commercial and cargo) cap out around 75. In the summer, pilots and passengers on inbound flights may be able to catch a glimpse of the pink, plastic flamingos in the grass just before touchdown on 28. In the winter, you’ll see penguins in the same spot. 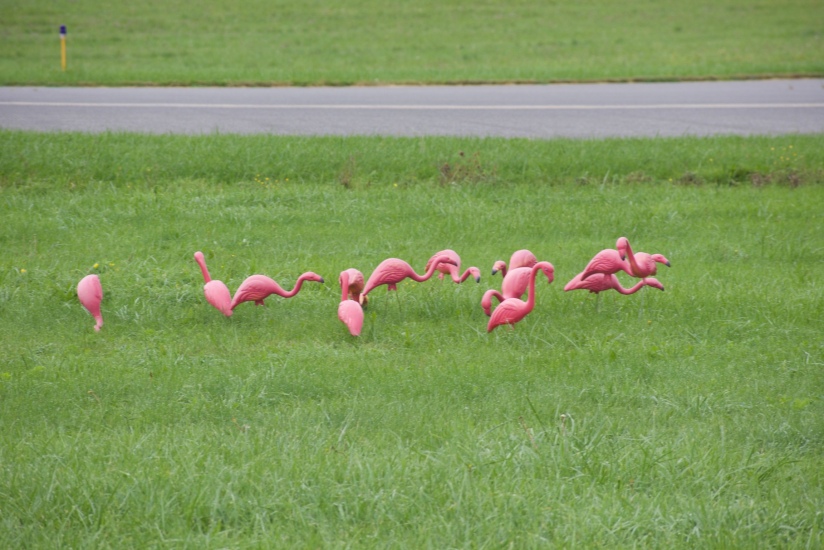 The terminal is in the midst of a $45 million renovation and upgrade that, if all goes according to plan, should be complete by the end of this month. It was a beautiful, charming place that I hope to return to. I had a great time chatting with Darren and exploring the airport. We wrapped up our airfield tour close to 10:30 a.m., at which time I hopped in a Lyft and headed into town.

First up, Glazed and Confused—a cute donut shop right in downtown that had stellar reviews. Though all of the donuts looked tasty, I opted for the “Pardon My French Toast” and took it to go. I strolled north to Freedom of Espresso, a local coffee shop occupying a smallish space in the lower level of a large brick building. I opened the door and stepped up to the counter, and wouldn’t you know it? “Samson” by Regina Spektor was playing. I mean COME ON… I was clearly meant to be in Syracuse. I then hunkered down with a cold brew to compliment my syrupy, doughy and frosting-laden breakfast treat. 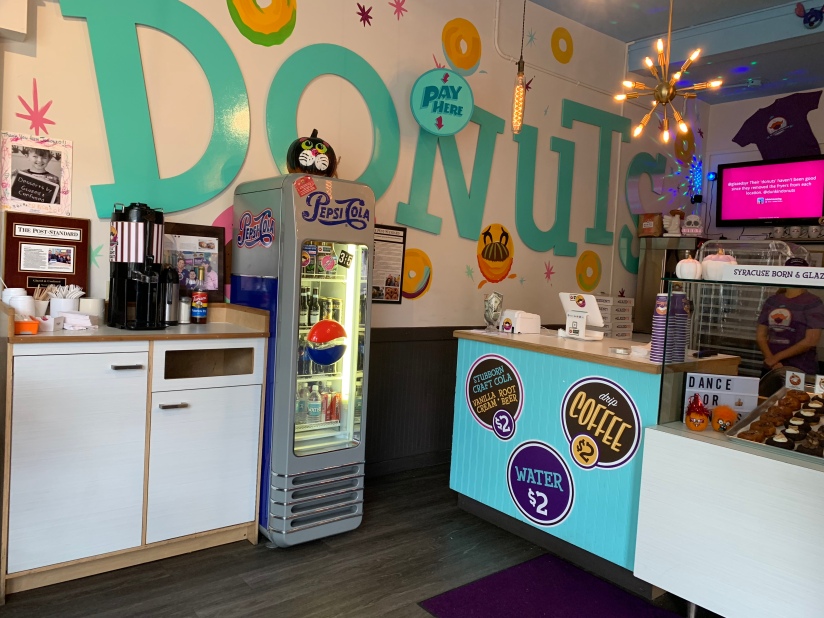 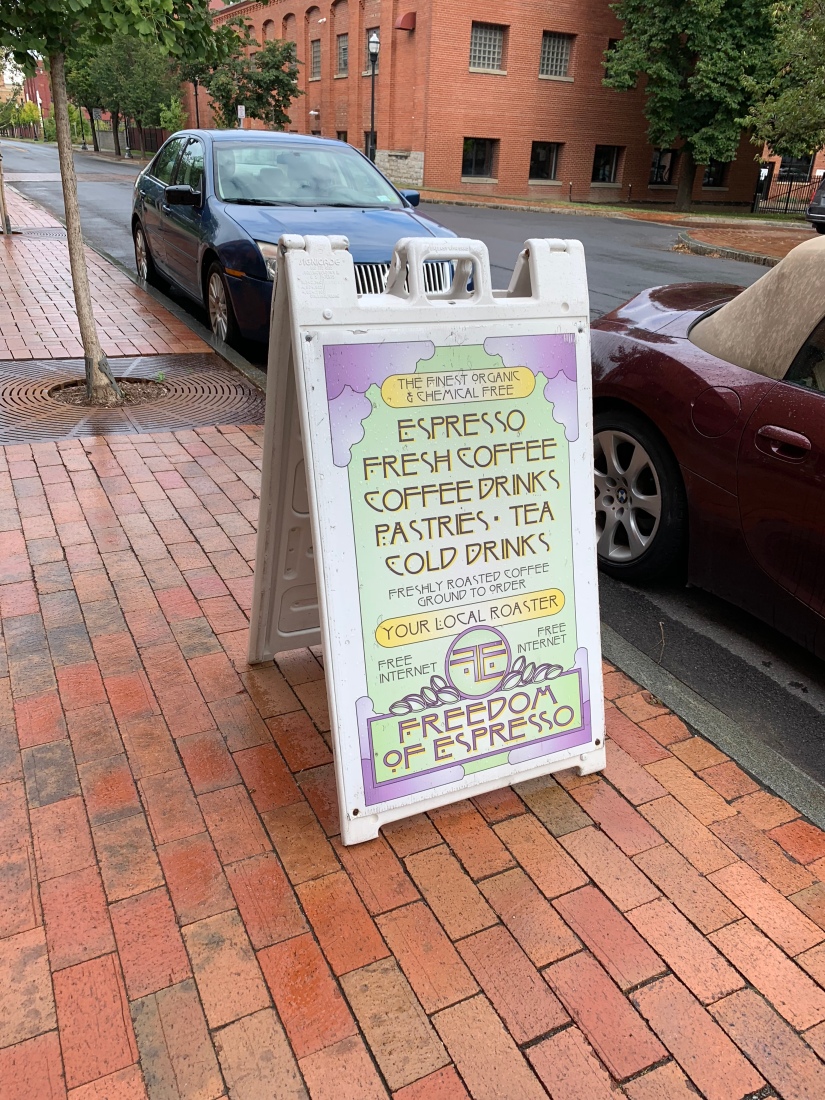 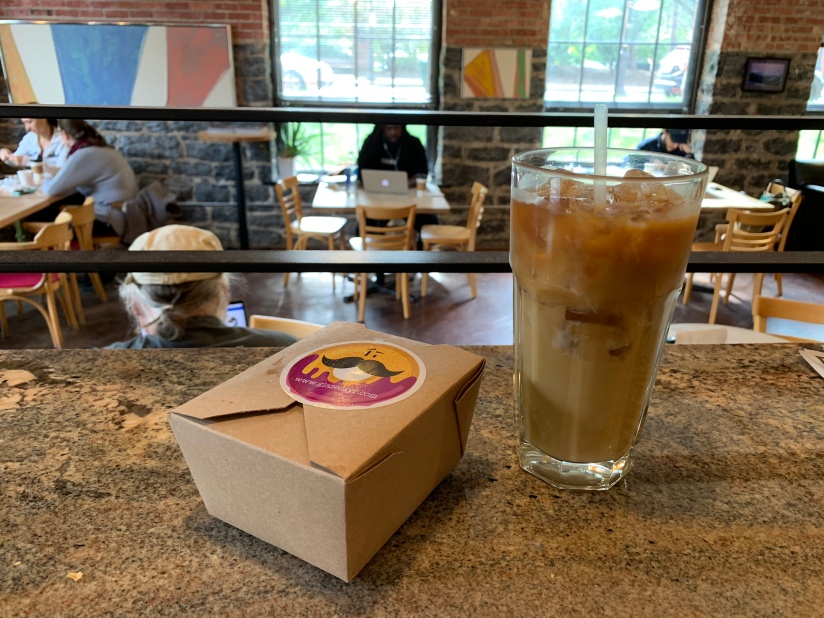 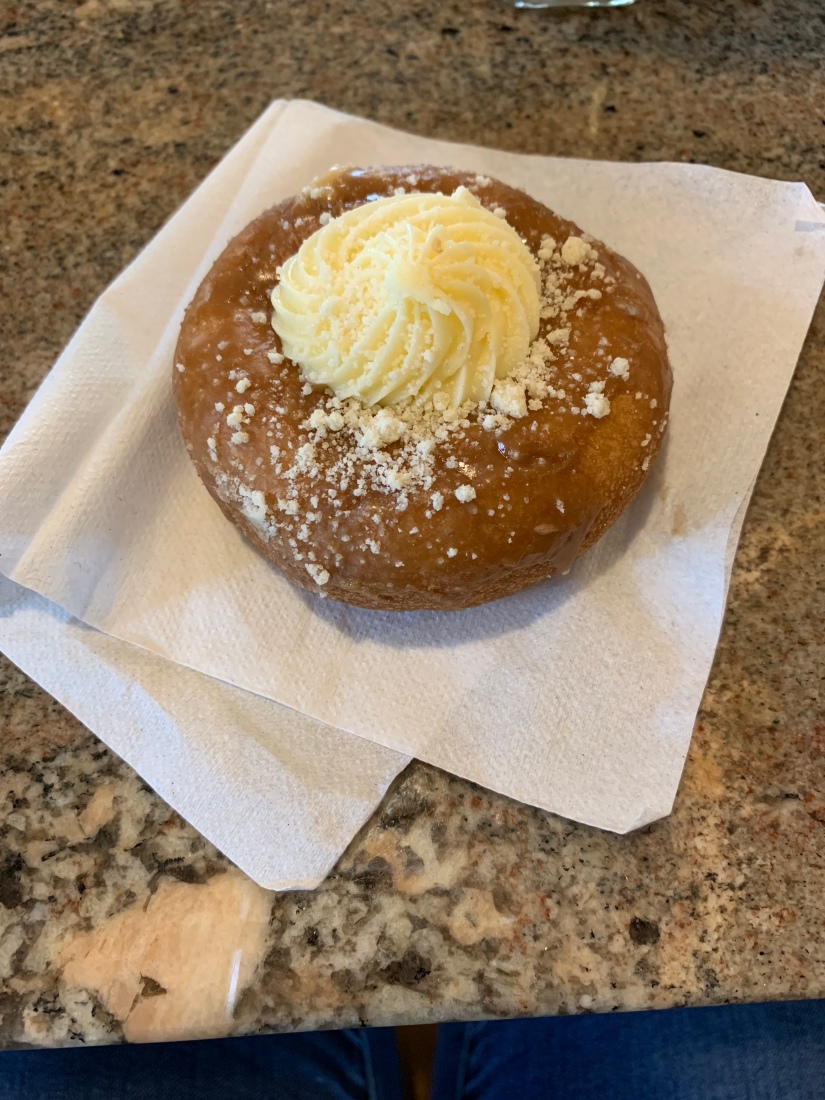 After that, I ventured to Syracuse’s Inner Harbor where I found hundreds of birds spread across the greenest grass—most of the birds were seagulls but a few other species of water fowl were peppered in the sea of green and white. 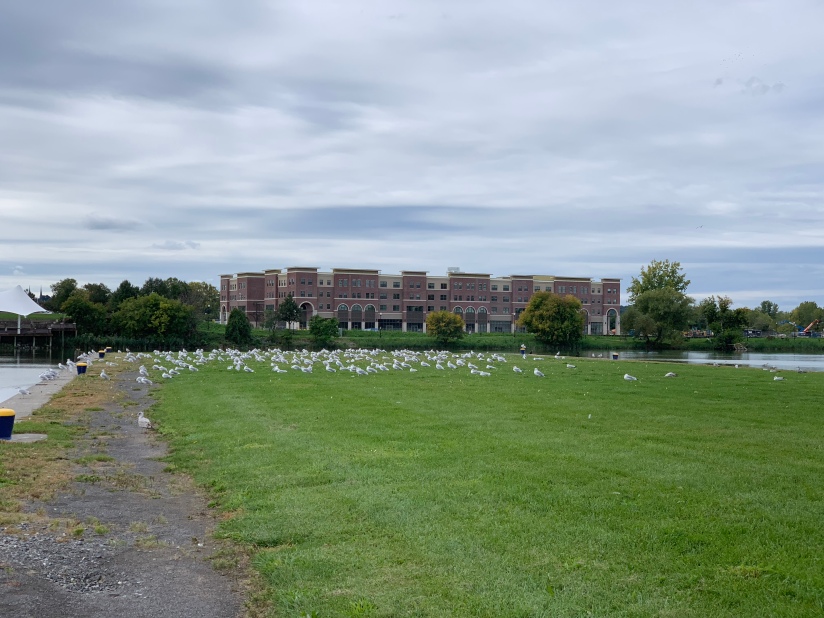 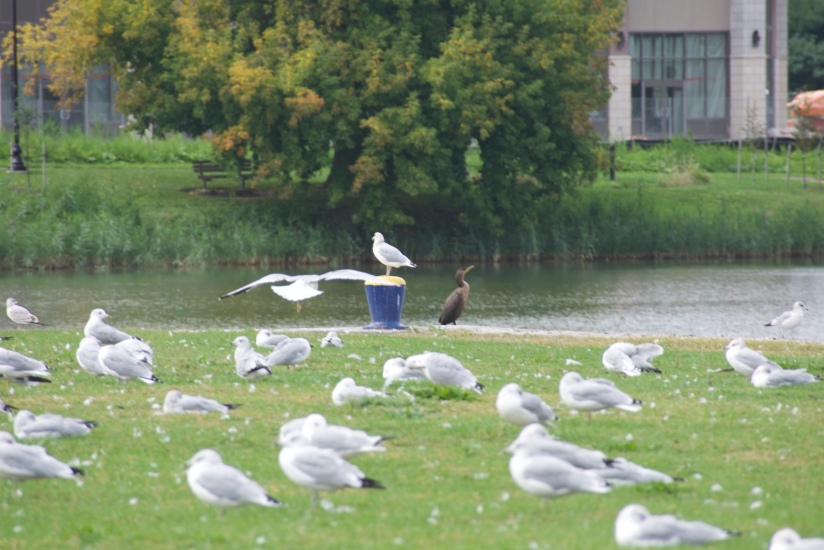 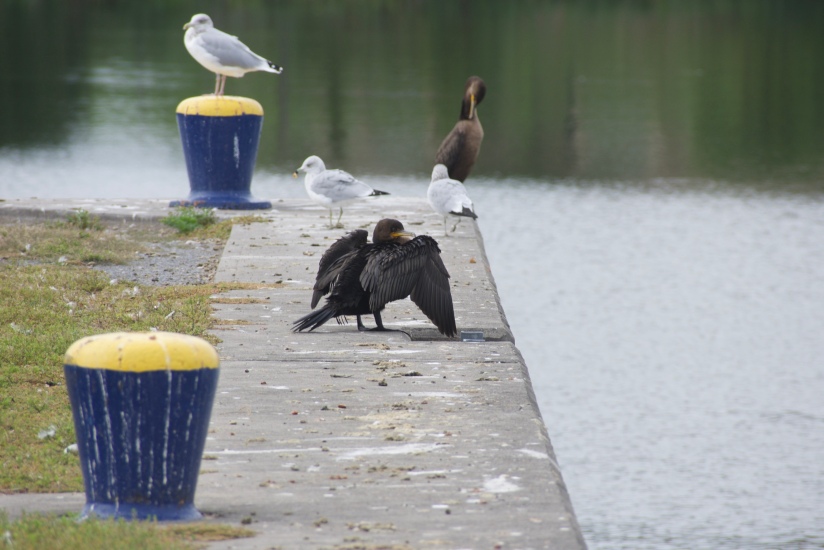 After taking some photos, I left the area and ventured back south toward Middle Ages Brewing—the city’s longest running brewery. I was pleased to find a very industrial-style, warehouse type building and an entry way that led me into a cozy, dog-friendly hangout that serves nothing but the beer they brew right there. 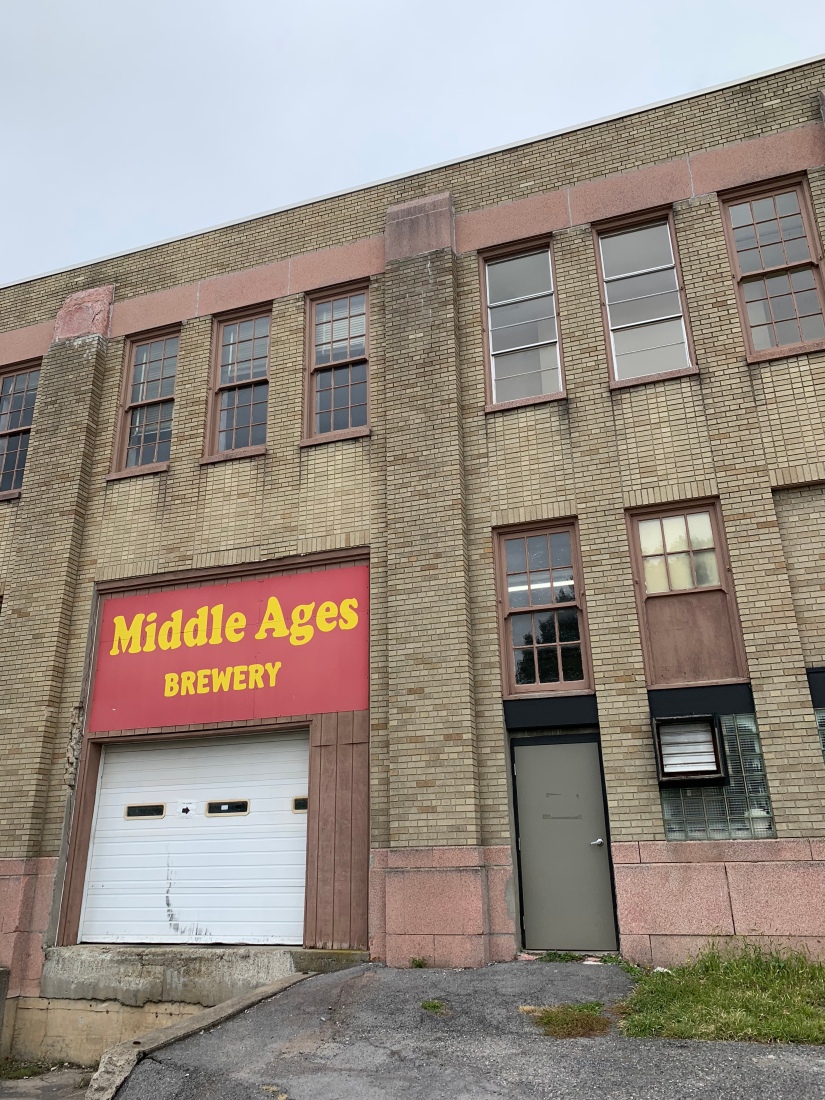 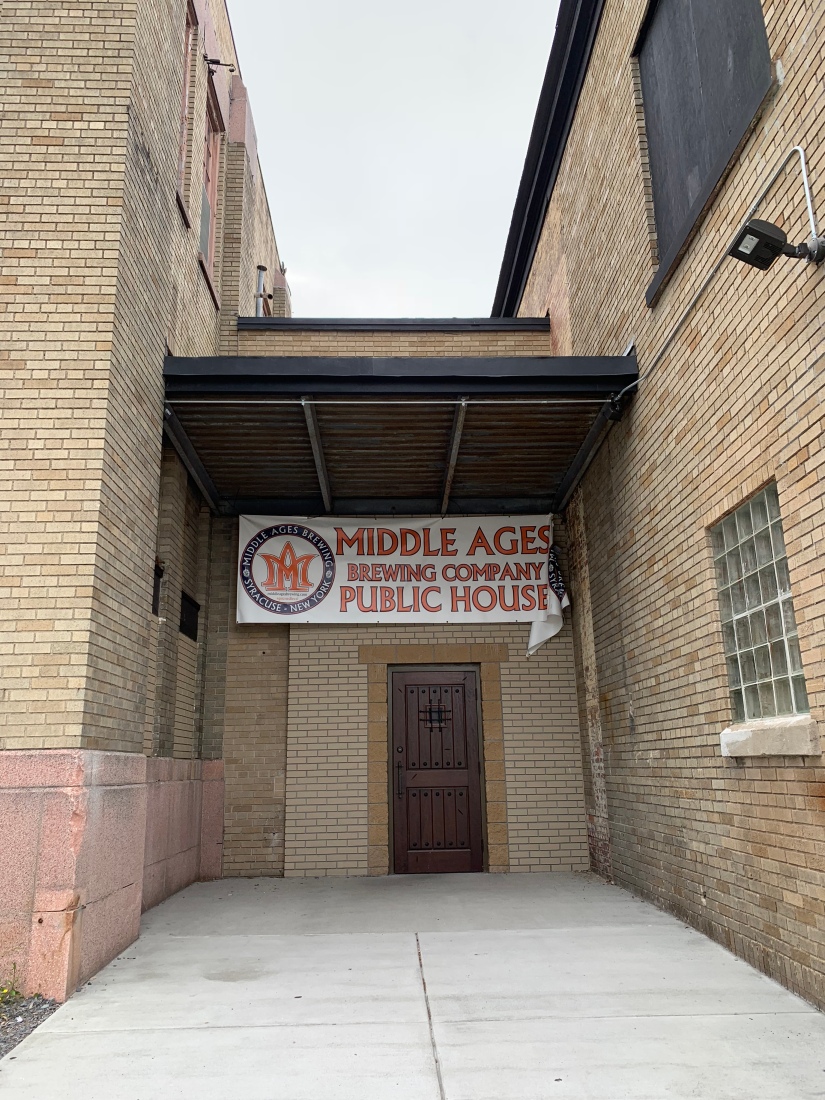 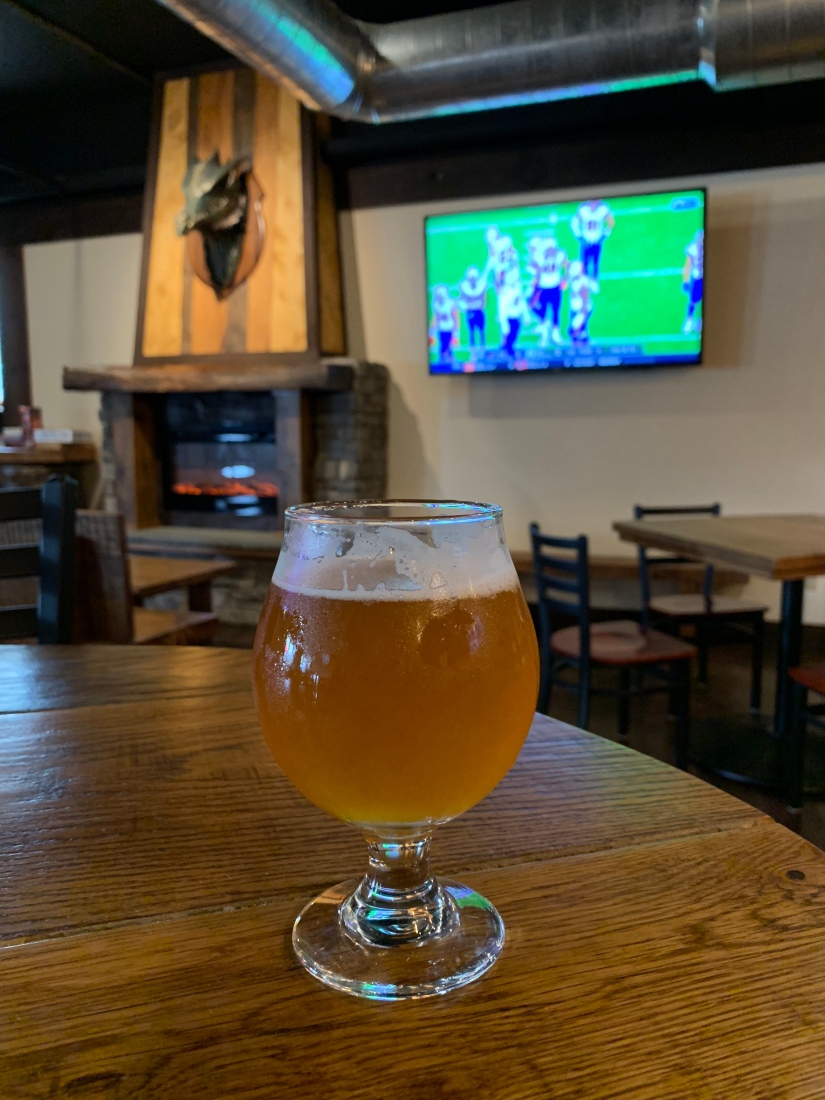 Following that, I headed back toward the heart of downtown to see what was going on at Sahm Brewing. Surprisingly when I arrived, no other patrons were there… just me. I ordered an IPA at the bar and took it outside to the patio. Being out and about alone is a bit awkward in and of itself, but being the only person at a restaurant or brewery is flat out awkward. The beer, however, was stellar! 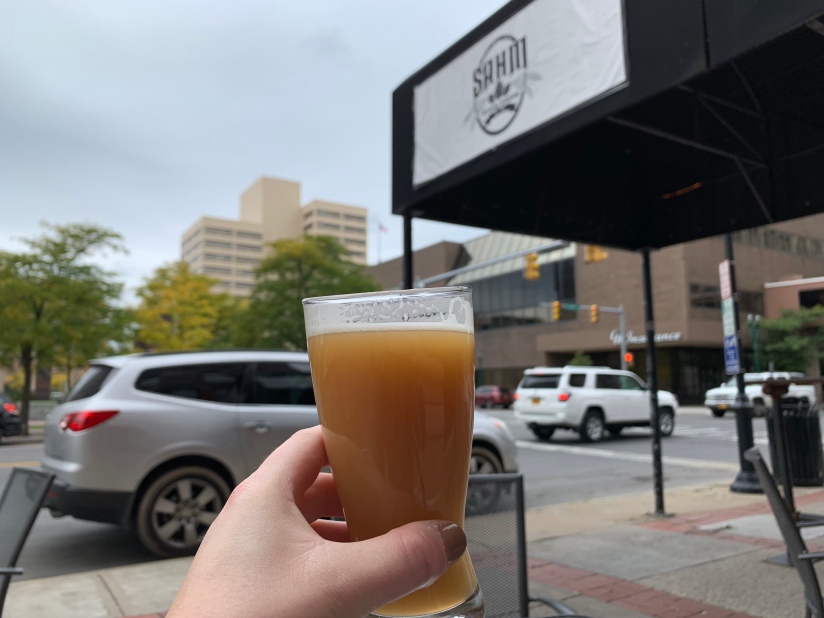 And then… it was time for more food! I meandered through the city streets to Strong Hearts Cafe, a renowned vegan eatery that I was really looking forward to visiting. While I am vegetarian and not all-out vegan, I still love me some quality food that is completely void of anything relating to an animal. I got the BBQ tempeh sandwich and a side of the macaroni salad… both were delish. 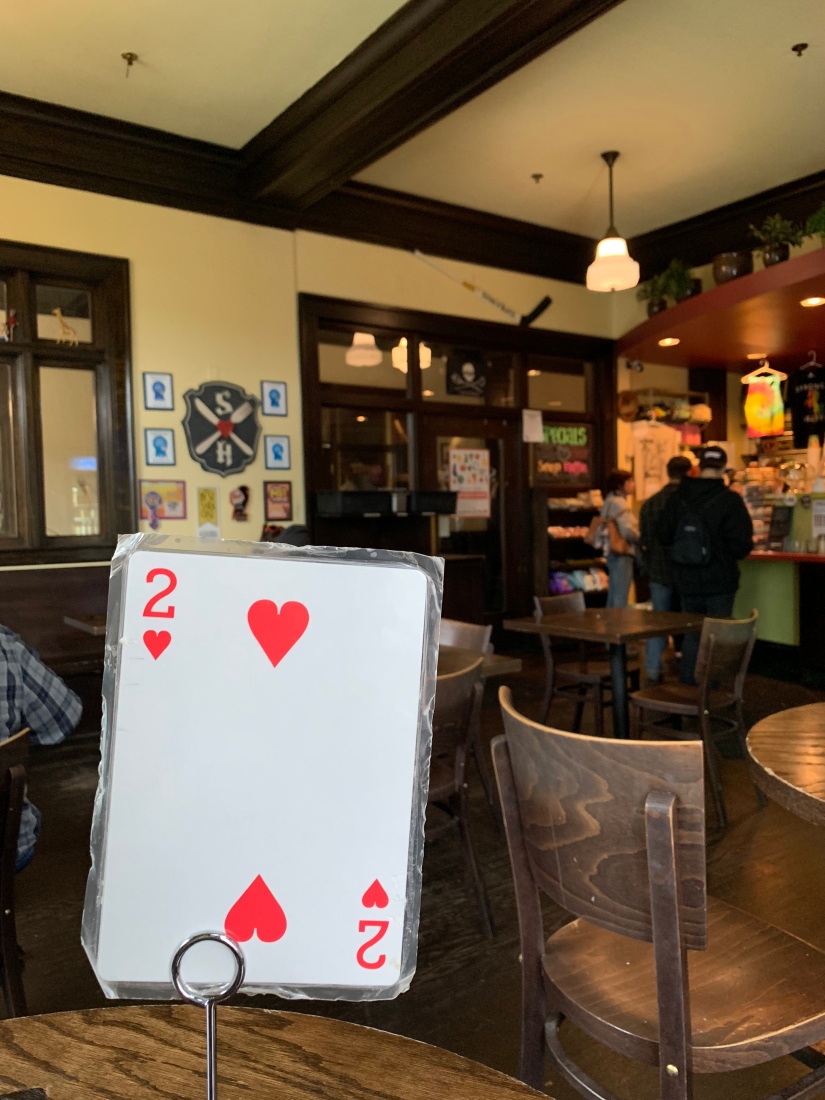 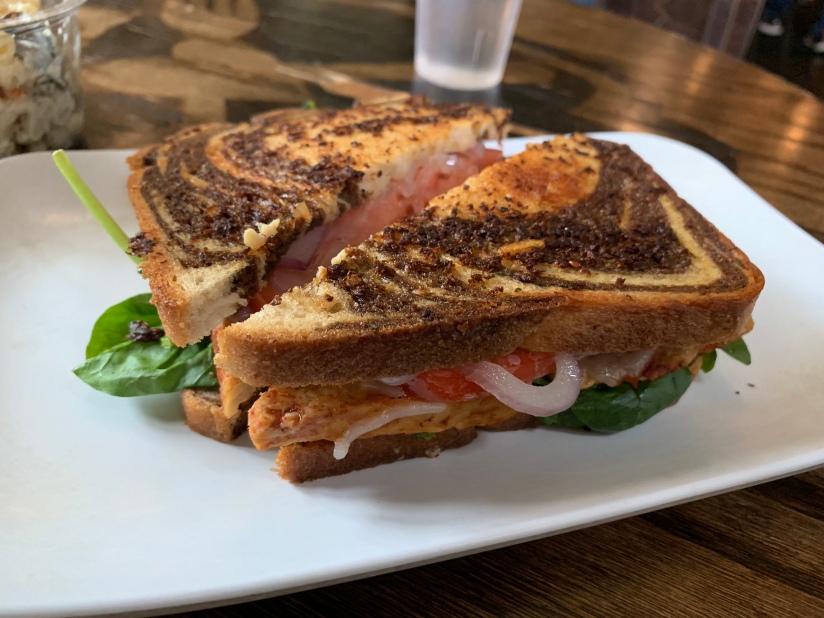 Finally, I knew it was about time to head back to the airport. I had a couple hours to spare, so I figured I would get as close as I could on foot. I made it about five miles before I had to call a Lyft to help me with the final stretch (roughly a mile).

I relaxed inside the terminal and grabbed one final brew at Middle Ages’ airport location, which also had some pretty tasty sounding grub. I then saw my plane arrive… Frontier’s “Rosie the River Otter” Airbus A320neo that I had oddly enough taken photos of earlier in the week out at O’Hare here in Chicago. Even though the plane wasn’t a Boeing, watching it being prepped for me and my fellow travelers to board made me feel something so magical. Wrapped up in the moment, I was so quickly brought back to the passion that brought me to where I am today. The icing on the cake? Being in row 16, I was part of the “rear boarding” group who got to walk out on the tarmac and board the aircraft via stairs as opposed to the jetway that the folks seated in the front several rows had been using. 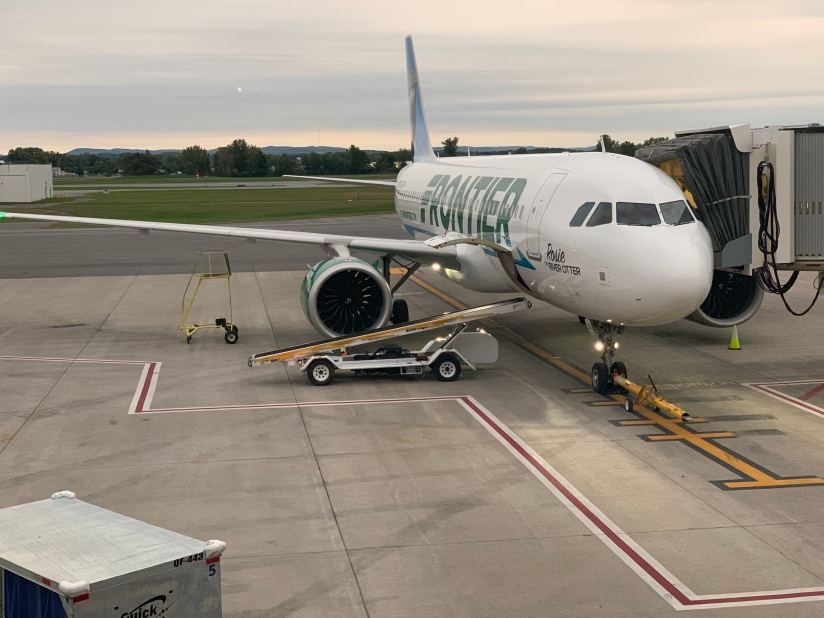 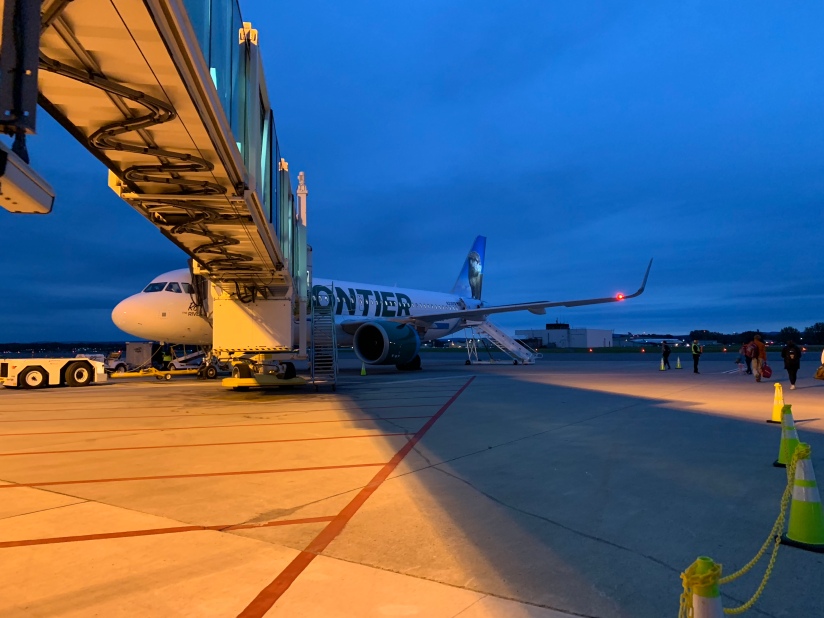 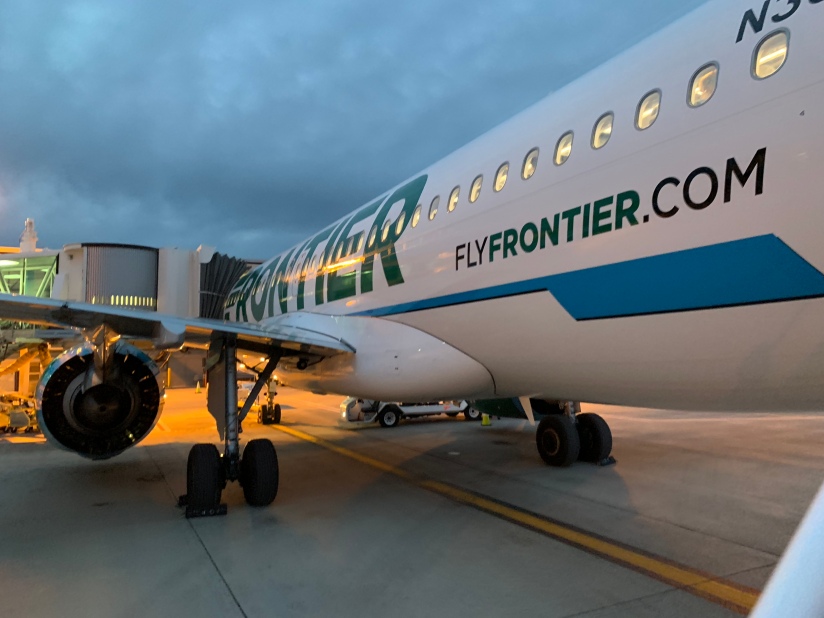 I cozied up in my over-wing window seat, closed my eyes and before I knew it I was home. The Windy City welcomed me back with open arms, as she always does. I’m a very lucky girl, and I’m especially careful to make sure I don’t lose sight of that. Thank you Syracuse, for an exceptional day. 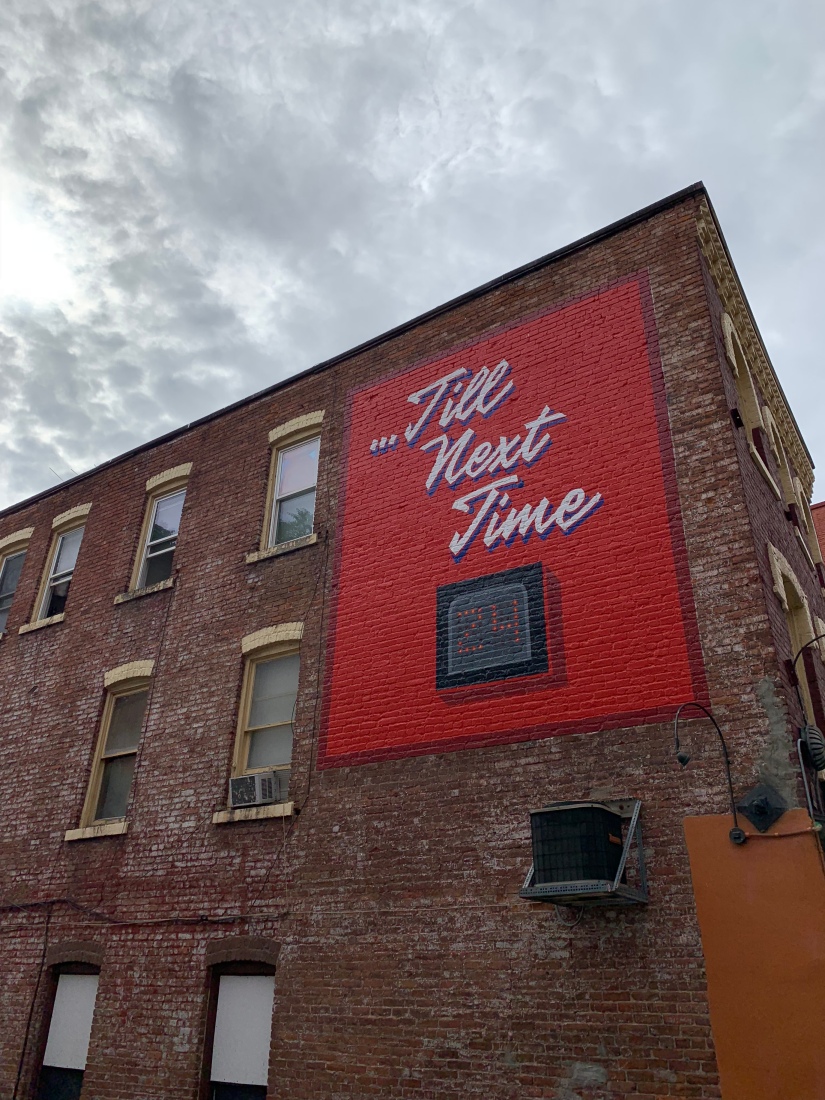