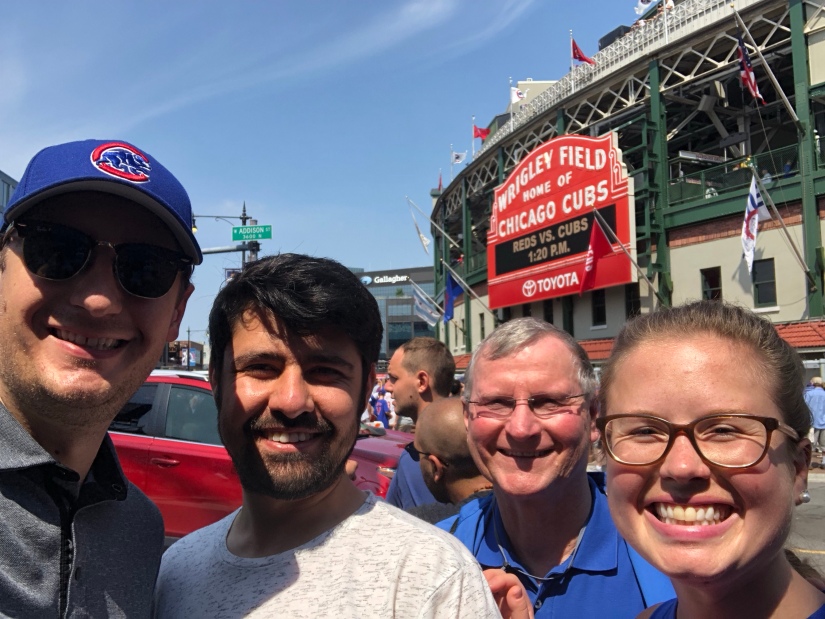 This past Sunday, I spent the afternoon at Wrigley field watching the Chicago Cubs sweep the Cincinnati Reds in game four of the series.

It was sweltering hot.

But… when you’re enjoying the great American pastime with family and friends, a little spice in the air doesn’t matter.

To my left sat my dear friend Ahmet, who was in town visiting from Istanbul. Ahmet—as I’m sure many of you now know—was one of two lifelong friends I made last September when I unexpectedly underwent surgery for appendicitis while on assignment in Turkey for Airways Magazine.

To my right was my other half—you know… that guy who I’ve now known for a quarter of my life, been married to for a third of adulthood and who has (and always will have) my whole heart: my Scottie.

And next to him sat another pretty cool guy—someone who has been there for me for… forever. I call him DAD.

That game (and all the other fun activities the four of us partook in last weekend) was so special, just like the people I shared it with.

And then… starting that very evening, each of those men left, one by one. Ahmet flew halfway around the world Sunday night, landing at Ataturk Airport right about 3 in the afternoon Monday after a 10-hour overnight flight from O’Hare.

The next afternoon, my dad flew back to sunny Florida. I’ve been lucky to see him fairly often, both when I lived in Minneapolis and now here in Chicago. But that doesn’t make it any easier to say goodbye.

And then, the toughest of those three farewells came just this morning. Scott—who is about to begin his final year of school at the University of Minnesota—flew back to the Twin Cities after spending the whole summer here with me in the Windy City. After living apart for the first six months of my time in Chicago (I moved here for my job with Boeing last November) I was lucky enough to have him here with me for the last three months while he interned at a local company. We both knew it would come to an end, but I had no idea how quickly June, July and August would fly by.

If ever I’ve had to be strong, it’s now. It’s scary and sad to be alone once again. However, I’m realizing that my unwavering love of airplanes is so tightly woven into this story, and that brings me comfort.

Aviation is 100 percent in my blood. My dad was a navigator in C-130s with the U.S. Air Force, and he and my mom both worked as flight attendants for Eastern Airlines (that’s how they met!). To be able to share this passion with him has been incredibly special. He flew home to Florida sporting his blue Boeing polo… I know he is so proud of me, and that makes me so happy.

My sweet husband Scott has been my rock over the past eight years. He saw me recognize my passion, encouraged me to pursue that passion and supported me when I left for Chicago to take a job with the greatest aerospace company in the world. I love him to the moon… scratch that: I love him to MARS and back.

And last but not least, my passion for aviation is what ultimately led me to Airways Magazine, and they sent me to Istanbul, and THAT’S where I first met (and was in a sense SAVED by) Ahmet. I feel so lucky to know him and am honored that he came to visit me in Chicago.

So, while pursuing my passion has brought me so much joy, it has also made life a little more difficult at times… but that’s OK.

No one said life was easy.

You win some, you lose some.

Like I said… if ever I’ve had to be strong, it’s now. Because first there were four, and then there was one. And lucky for me, I’m one strong girl with one heck of a support system.

Fly on, my friends… fly on.