“Fly the wings of an eagle,
Glide along with the wind…
No matter how high,
I’ll be thinking of you the whole time.”

I first heard the song “Thinking of You” by Hanson as a 9-year-old girl who was crazy about boys and even crazier about music. Fast-forward 22 years, and oddly enough this song speaks to me more now than it ever did before.

One year ago today marked the first time I was truly on my own, living in Chicago. It was an unseasonably warm fall day, and I had no idea at the time how different life would be starting fresh in a new town, in a new job, with no family and only one friend—a high school pal who fortunately had lived in The Windy City for several years.

It was the day after Thanksgiving 2017 and my husband Scott, his brother Keith and I drove down here from Minneapolis. The two brothers hung around Saturday to help me get settled, but come Sunday morning… they headed back north. We said our goodbyes and I went for a long walk alone along Lake Michigan—I didn’t know what else to do with myself. I was equally excited and scared, knowing my new gig with Boeing would be an incredible experience, but being apart from Scott would be difficult to say the least.

It was my love of aviation that got me here—I’ve always loved traveling and the connectedness that comes with doing so, but more recently I’ve become fascinated with the physics of flight and all the magic that comes with defying gravity. When the opportunity presented itself, I couldn’t turn down the chance to work for the greatest aerospace company on the planet, but at the time, I had no idea that saying “yes” to a job, meant sacrificing so much.

Long story short, I wouldn’t change a thing…. I firmly believe that everything happens for a reason. I knew going into this that Scott and I would only be apart for 18 months… and we’re already two-thirds of the way through it! If the next six months go by even half as quickly as the last year did, it’ll be a breeze. Scott and I are two tough cookies, but together, we’re like… a tough Oreo… double stuffed with… toughness.

Yesterday around lunchtime, after spending the long holiday weekend together, Scott and I hit the road… he dropped me off at O’Hare before continuing on toward Minnesota. The airport is on his way home, so we get a bit more time together on the 20-minute drive, and I’m left feeling a lot less sad and a lot less lonely out there with my flying friends. What can I say? The airport is my happy place.

After spending a few hours photographing the heavies landing on 28C, I headed back to the train station to catch the blue line home. The sky was gray and the streets were empty… I cried a few tears, and then started humming “Thinking of You.” Today, I was inspired to tap back into my musical side, so I recorded my own version of the two-decades-old pop hit. So, without further ado, I give you my best impersonation of three prepubescent boys, rocking out in harmony. 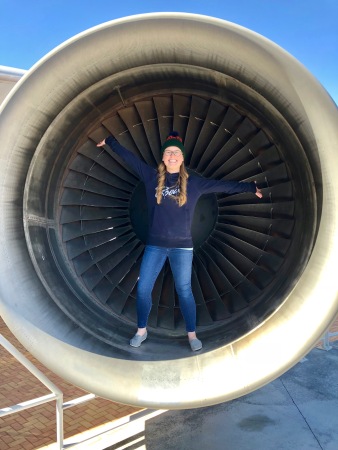 This past Monday, I went to flights.google.com. I typed in Chicago as my origin, I left the destination blank and I put Saturday, March 3 as both the departure and return date. I clicked “map” view and scoured the U.S. with a keen eye. Every city displayed roundtrip prices $150 and up… except one: Atlanta. Most don’t know and most would never guess, but I was actually born in Atlanta—June 16, 1987. The interesting thing was, the price that displayed just above the Atlanta, GA “dot” was $87. Yeah… this was happening.

I moved to Minnesota with my parents when I was still a baby, and I only returned to my true “hometown” once, for the 1996 Summer Olympics with my dad. It was a great trip—something not a lot of nine-year-old kids get to do, but I found it rather odd that technically, I’ve been an adult for almost 13 years, and I’d never returned to the Peach State… until yesterday.

I’m sure it goes without saying, but Hartsfield-Jackson (being the busiest airport in the entire world) had just a bit of influence on my seemingly impulsive decision to fly there for a day—that and the fact that the Delta Flight Museum also happened to be in ATL.

I think some people were a little surprised that I planned to spend nearly $100 just to fly to and from Atlanta for one day, all by myself. But you know what? After my solo trip to Istanbul where I ended up in the hospital on day one for an emergency appendectomy… I LOVE the idea of traveling solo. There is something so liberating about it.

So, after a full week of work, I awoke—albeit slightly unenthusiastically—at 5:30 Saturday morning to catch the 6:15 a.m. train to O’Hare. Being at airports and flying are things I would give just about anything to do any day of the week, so the early wake up on a weekend was a “no-brainer” for me.

I arrived at the airport, sped through security (thanks TSA pre-check) and took a few photos of planes taxiing or at their gates, before making it to my own gate to board the American Airlines 737 that would carry me to Atlanta.

When I landed at Hartsfield-Jackson, I immediately made my way to the ride-share area to catch a Lyft over to the Delta Flight Museum. When I arrived… let’s just say my bottom jaw was practically on the pavement outside the massive hangars that housed the aviation artifacts I was about to set eyes on. Upon entering, I couldn’t even believe what was in front of me: a Douglas DC-3, a Travel Air 6B Sedan and the always-beautiful “Spirit of Delta” Boeing 767, to name a few.

I was sort of in shock… not knowing where to go, what to touch, how to feel, who to talk to… above all, I was in AV geek heaven. A few highlights: meeting a group of six to seven friends who were likely in their late 70s/early 80s inside the “Spirit of Delta” who had asked me to take their photo, meeting them again at the first Boeing 747-400 ever built (Ship 6301) where they asked me to take another photo of them in front of an engine and where they, kindly, offered to take a photo of me standing in that engine (YES PLEASE!) and, finally, being able to walk out on the wing of the Queen of the Skies.

If you are an AV geek, and you’ve never been to this museum… you ARE missing out. Seriously. Go there as soon as you possibly can. You will not be disappointed.

Following my time there, I headed out to the Georgia Tech campus where I spent some time exploring and, most-importantly, reenergizing with an iced coffee and stuffing my face with a donut that happened to BE about the size of my face. I then bought a MARTA ticket and took the train back to the airport, where I made my way to the top of the south daily parking ramp to take some photos.

The weather was perfect: low 60s and warm sunshine. I saw a KLM 777, the Lufthansa A-340 in the Star Alliance livery and, expectedly, dozens of Maddog MD-80s and 90s. It was lovely.

I went back into the airport, found my way to my gate and boarded my ERJ-175 (my first time on an Embraer jet!) to fly back home to Chicago. It was a perfect, perfect day. And it must have been good… because I woke up this “morning” at 12:30 p.m.—I KNOW!

So… tonight, I raise a glass (OK, a tallboy of Collective Arts’ Radio the Mothership) in honor of Atlanta: my hometown and a true AV geek heaven. Thanks for the memories ATL.

I have a lot to learn.

I listen to the Minneapolis Air Traffic Control (ATC) tower feed quite often, and have been doing so for the last couple years. I love spotting out at MSP, but you don’t see a whole lot of heavies out there. And despite how much I wish… how much I pray… how hard I cross my little fingers… it never ends up being a 747 flying in over the river, and it’s never an A380 being pushed back from its gate.

OF COURSE! Listen to the ATC tower feed out of JFK, close my eyes, and try with all my might to pretend I’m out there watching it live. I’ve been doing this for about a week now on my 45-minute bus rides to and from work. It’s amazing. There is never a dull moment and I’m actually surprised at how well I can picture all the action in my head.

However, I’ve realized as I’ve listened to the feed that I have a lot of learning to do. Nearly every other flight that has been cleared for departure or landing has left me dumbfounded because I have NO clue what airline it is. I knew I’d hear a lot of unfamiliar names… but some were more than unfamiliar, they were simply NOT airlines. What gives?

I pondered and pondered. Then I picked up on the pilot’s British accent. Still… I was clueless. I then tried to figure out what flight I was hearing simply by its number and knowing it was getting ready to depart JFK. And… BOOM! British Airways 178. I found it.

I remembered that my dad had once told me the British Airways call sign was Speedbird. I was equally as excited as I was proud of myself for solving the mystery. And having figured that out, I wondered if there were any other flights that I was unable to decipher due to not understanding what airline the pilot (or even the controller) had said.

Well, there was one that I knew was getting ready to land, but all I heard through the static was something like, “Ine-see 5322 heavy.” Of course I was intrigued knowing it was a heavy, so I paid closer attention… but I still couldn’t figure it out. Similar to what happened with good old Speedbird, however, something clicked. “Were they saying ‘dynasty’?” I asked myself. Sure enough… China Airlines flight 5322, a Boeing 747-400, had just landed at JFK. And… the call sign for China Airlines? You guessed it. Dynasty.

Then I remembered that even earlier I had heard a “Redwood” flight… and after searching and searching, I had given up. But after my epiphany, I did some digging to find out that Redwood = Virgin America.

Sure, this was great. This was incredibly exciting. But… I said it before and I’ll say it again: this all just helped me to realize that I have a lot to learn. I’ve found some interesting forums on the topic of airline call signs, and I even found this helpful list that lays out some of the more common ones: Top 10 Coolest Airline Callsigns.

I’ll never be as knowledgeable as the controllers. Heck, I’ll never even be able to speak as quickly and as effortlessly as they do. But… I think reading up on call signs and studying airport runway and approach maps will really help me to paint an even more vivid picture in my head each time I listen to that bustling hub’s feed.